This was the highlight of my trip, when the real adventure happened.

I woke up as early as 4:00am (Feb. 22, 2016) to get myself ready and travel to the south of Cebu. I immediately contacted Kuya Rolly (my habal-habal driver from part 1, you can reach him at 09324344303) to pick me up at my hotel. It was too early that he was still asleep. So, I thought of just riding the bus going to Oslob (P155.) I just Googled it, and I think I can do it alone! I checked out at around 5am from my hotel and rode a taxi (P70) to the south bus terminal. I reached the bus terminal at 5:10am and was ready to buy a ticket going to Oslob. Luckily (I guess), Kuya Rolly called me and apologized for not waking up early. He just told the he’ll just pick me up at the terminal and proceed to the south.

As of 2020, I am no longer encouraging to visit whaleshark watching in Oslob because of several harmful effects to the environment.

If you want to swim with whalesharks, better do it in Sorsogon because they practice much better tourism with regards to whaleshark watching. 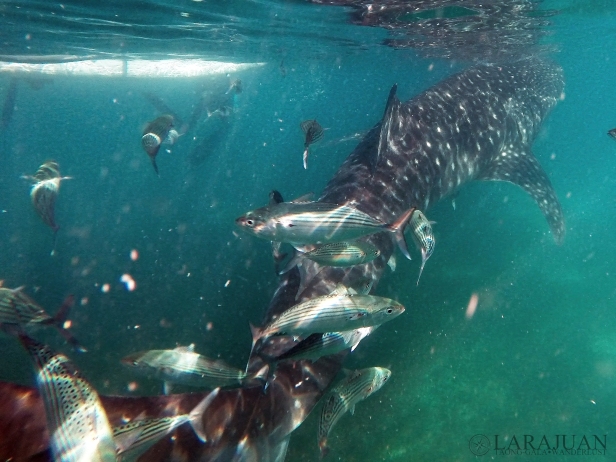 We headed next to Aguinid Falls in Samboan. This was not really included in my itinerary; but, Kuya Rolly suggested that we should pass by it. Technically, it was just a side trip before proceeding to Alegria for the canyoneering. There is an entrance fee of P10 and mandatory guide with voluntary pay. I paid mine with P50 since I was alone and it was just a short time. 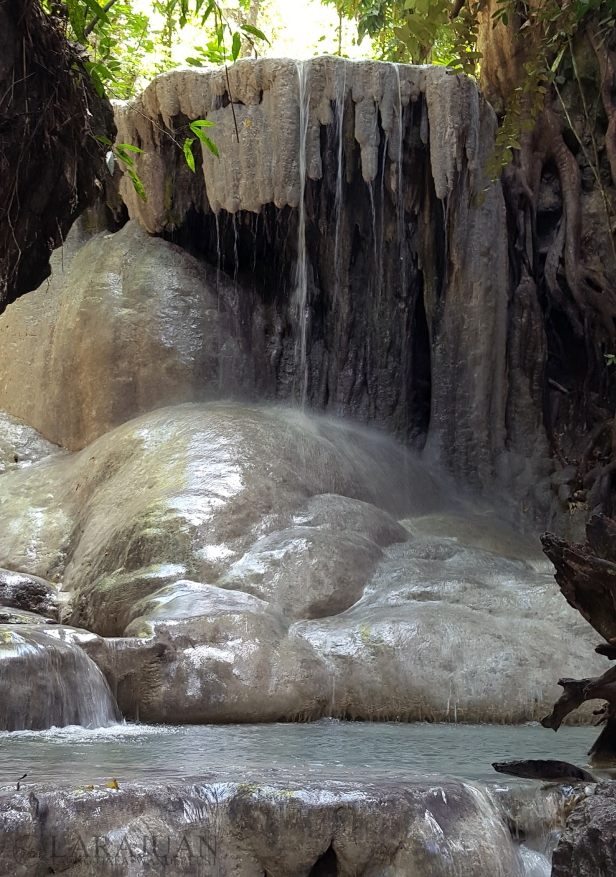 The Aguinid Falls has different levels where you need to climb to reach the next level. It is pretty awesome. Gratefully, Kuya Rolly brought me there even with a limited time. How I wish I was able spend more time in the falls.

We went straight ahead to Badian. It is where Kuya Rolly’s known friend who rents out equipment and provide guides for canyoneering. After getting the life jacket and helmet, we rode the habal-habal of the guide going to Alegria to begin the canyoneering.

It’s somehow envious to see people doing the canyoneering in groups. Ang hirap kasi magyaya sa malayong lugar, puro mahihirap kasi mga kaibigan ko. Mga nagpapanggap na busy sa buhay. JK Hahaha! There are a lot of foreigners doing it too. While me, a solo traveler, I was just with Kuya Rolly and the canyoneering guide. In total, we’re just 3 in the group. Hooray for solo travelers! 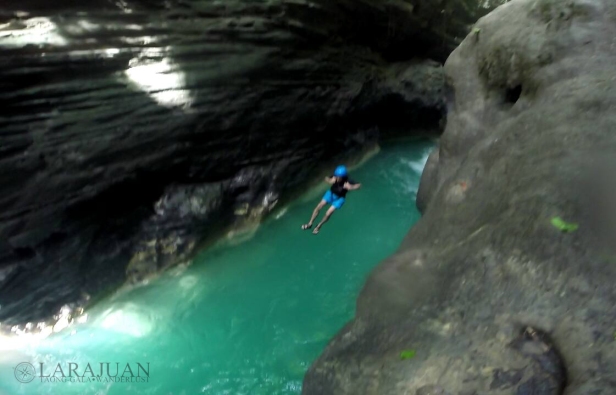 There are several jump-off sites in canyoneering and you’ll land in deep waters. The first jump is mandatory to be able to begin the activity. After jumping off, there is no point of return. There’s no way you can climb back. That’s why after the first jump, you need to finish the entire course. 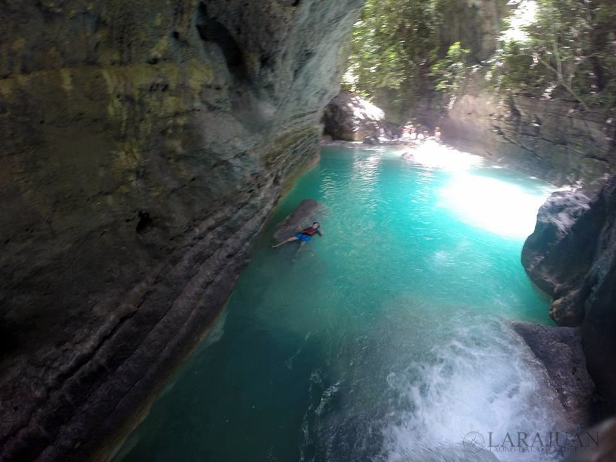 Personally, I am afraid of heights. But I know I can conquer it, that’s the reason I did this activity. It was really scary at first, and you don’t really get your fear out of you. You just get more courage and jump off again and again. It comes back when had too much time not doing it. Haha!

There are jump off sites that you may or may not jump off of it. There’s one jump off point where you need to run before jumping off so you won’t land on rocks and will not trip off of the root of the tree. I was so scared that I might hesitate before jumping and might land on the rocks. I can only jump off where I am already at the edge of the cliff, no running. Natatakot ako mabasag ang inaalagaan kong mukha. Mahirap na. Hahaha!

I was able to jump off at the falls before the main Kawasan falls. Ayun ang saya! I conquered my fear! Sulit ang P2,000 na binayad ko. (P1,500 for canyoneering, P500 for the guide since mag-isa lang ako.) Feeling ko nga lang nalamog ako kakatalon sa tubig from heights. We finished the course in just less than 3 hours. 3 lang kasi kami, tsaka wala masyadong arte, puro talon kaya mabilis. It usually takes 4 hours to complete the activity. There is an optional activity at the Kawasan Falls where you can ride the raft and the boatman provides an activity with the use of waterfalls. There’s an additional fee for that activity.

There is no time left for me to see the school of sardines at Moalboal. But still lucky enough to drop-by at the beach of Moalboal and have a glimpse of it. Asan ang sardinas? Ayun 555 na. Hahaha!

BACK TO CEBU CITY

We were also able to pass by the chocolate hills version of Cebu. Hahaha! Buti na lang nakita ko yun, kasi hindi ako nakarating sa Chocolate Hills ng Bohol. I returned to Cebu City at around 8pm and had my dinner. I booked again at Hotel Fortuna. We tried checking out other hotels, pero mas mahal kasi.

I was able to do a lot of activities in the South Cebu for one day! Thanks to Kuya Rolly. But you may opt to stay overnight in the south if you like to. I paid Kuya Rolly P1,700 plus souvenir shirt from Marikina Rescue! Hahaha!

I was dead tired after that day. It was the best birthday experience ever! 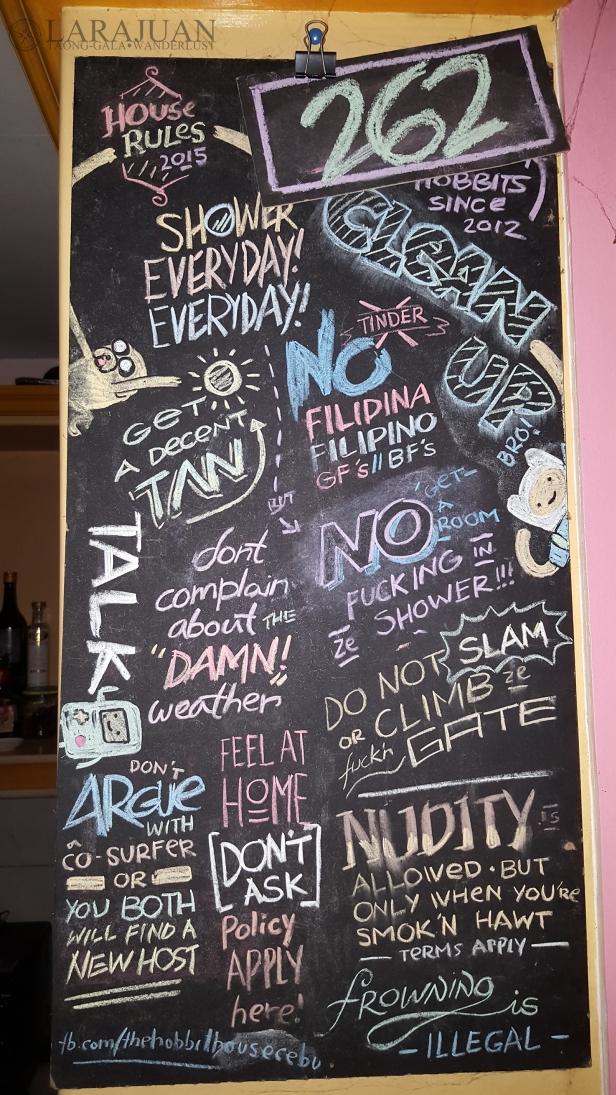 The next day (Feb. 23, 2016), taghirap na ko. Hahahaha! Luckily, Junior Icban (Hobbit House) a Couchsurfer, texted me that I could stay in his place for the night. I woke up late because I was dead tired. Nasulit ko yung room na check out at 12nn.

Kris: It’s getting what you pay for! Ahahaha!

Going back, I tried not spend anymore that day because I still need to go to Bohol the next day. I just rested and spent for my food that day. It was my first time doing Couchsurfing, and it turned out great! Because it’s free! He has hosted a lot of tourist, and many of them were foreigners. I just left him with my Thai pants (sewn by my mom) as souvenir.

Expenses for Day 2 and 3